I got two books on the Amazon Author Page now. check them out. 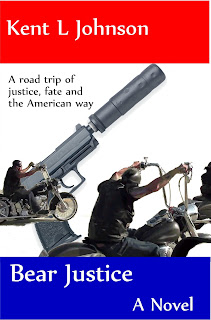 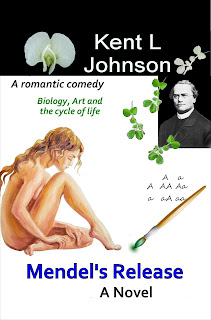 
Her eyes are what attracted me to her in the beginning. A hazel iris, surrounded by shiny gold pigmentation. How alluring and inviting those eyes are, as they scan manuscript pages late at night in a twenty-four hour coffee shop. Well, that and her pale white skin, so easy to see in the dark. But what I find most to love is her mind; sharp, witty and how they say, 'outside the box.' That's hard to find in most people I meet, nocturnal like me.

I can't remember the last time I actually saw the light of day. I work the night trading stocks in Tokyo, Hong Kong or Australia, while US stock traders sleep. Before I call it a day, I place my buy, sell or short orders for the US market based on what happens a half world away. I usually make my best money while I'm asleep.

Clair prefers the night too. She works for a publishing house. She reads submissions from unknown writers. She throws most away, but sometimes a jewel gets put into her pile and she submits it to people higher up the food chain. Clair doesn't like to work at the office because she doesn't like the people there: people who gossip, the people who play petty games for the attention of some executive or another, the people striving for more money, or more power. Clair doesn't play those games.

She picks up new manuscripts weekdays at four PM, then reads most of the night. She reads at home or she reads at a twenty-four hour restaurant like tonight. I punch keys on a computer at home or from some Wi-Fi hot spot like this place.

Clair and I met over six months ago. Hard not to notice each other. We are the only two people in the city that seem to show up at all hours of the night at one place or another, alone, punching keys or turning pages. We get to know each other, we begin to date. We date late night, because that's how we live. My day ends at about six in the morning; hers, around seven. We eat meals together at our favorite spots, sometimes get an after work drink at an all night private club.

Some Asian holiday tonight. I don't need to work and the weekend is here. Clair places a paper clip on a few pages of someones hard work and writes, 'Declined,' in large red letters across the title page. She places it in her carry bag and pushes the bag to the inside of the booth, near the wall.

“Another one bites the dust,” she says. She lifts a coffee cup to her lips and I watch as the soft tissue gently touches the cup and she takes a sip. “Whatever happened to literature?”

“Yes. I remember reading literature in high school, in college. We discussed it. It had...” She pauses, then wraps her hand completely around the coffee cup, like she's trying to get warm. “Double Entendre.”

I sit silently, watching her. It's only a matter of time before she coughs up the definition. She stares back at me, a smile on her face. She takes another sip of coffee. I lose sight of her little pale nose as the cup tilts, then it reappears. She licks her lips, then smiles again, watching me.

I can't take it. I break the silence. “You mean like Double Entree?” I know this isn't what she means. “Steak and Shrimp?”

“No, and I know, you know, better than that.” The smile still on her face. “Remember when we read the classics in school? Those great novels that are a story but tell another story. Double Entendre: two meanings. You would have a story about leaving the homestead, facing impossible obstacles, then finally finding a new spot, a better spot for you and your children. The great whale and the intolerable rage that made a man so insane he risks not only his own life, but the lives of many others to extract revenge.”

“But the second meaning is perhaps about the state of the human condition, or maybe an historical circumstance that needs to be reiterated. Jealousy, irony, rage and deception. Steinbeck, Cervantes, Voltaire, oh so many great writers who wrote great prose that had a bigger meaning than just the story.”

I love the way she looks when she gets excited about a subject. She gets a flush across her normally pale skin, and for a moment, for just a tiny moment, I think that perhaps, a drop of sweat might appear. It never does, but I always think it might.

“Was the last story you read, that bad?”

“More of the same, I guess.” Clair throws her head back, the small strands of long blond hair that are not already tied back, fall limply behind her head.

“I know we both spend most of our time out at night while people are asleep, but I'm thinking about becoming a Peeping Tom around nine-thirty or ten.” She pauses. “Just to see if it's true.”

“Are there really that many women having sex with their dogs?”

My head tilts to the side before I even realize. “What are you talking about?”

“It's still taboo to talk about sex between humans and animals. At least in the mainstream world of commercial fiction it should be.”

“All these stories that are being submitted recently. Girls having sex with werewolves. Come on now. It seems like every girl, woman or housewife that thinks about a story to make into a book, involves a woman having sex with a werewolf.”

“No, not every one. Just the ones submitting stories to our publishing house. Have you ever seen a werewolf?”

“Have you ever met anyone that's seen a werewolf?”

“Let's make the logical connection. No werewolves. So that must mean that subconsciously, we're talking about having sex with a dog.”

“I see the connection.”

“And it's only women having sex with dogs. In the past, people made fun of farm boys coming of age and screwing barnyard animals, of which I'm sure there is some truth, otherwise the stories wouldn't exist. Follow that logic: women with dogs. There are female werewolves, but I guess human men don't interest them because they never seem to be going out with one.”

I sit silent and look at her. Her face is flush, and the underlying veins run a darker blue. I feel her foot touch mine under the table.

“And you know what else gets me? All the women are the same. They are all described like anime girls. Tiny girls with small hips but super soft and supple, BIG tits. Mounds of pudding wrapped in satin with a nipple on top.”

I smile at her description. She's witty.

“But the tits are strong and forthcoming for being such soft gelatin. Perky. Held right out there without a sag, like the way strong Douglas firs sprout from the mountains of coastal British Columbia. Ever reaching. God, I have to read this crap day in and day out.”

I place my hands over hers and gently touch her leg with my leg under the table. Her hands are soft and smooth. I lean across the table and look her in the eye. “I think you need a break. Let's go to the club and get a drink.”

I give the waiter a large bill and tell him to keep the change. We walk outside into the dark, down the street and towards my car. My arm is around her shoulders and I pull her towards me as we walk. The streets are deserted at this hour, only a cat or two making sounds in the alleyways.

We reach the car and I spin Claire around and gently push her against it. I lean toward her, feeling her breath on my face. Our noses touch. I move my head to the right, forward next to her and gently lick her earlobe. My hands are on her shoulders and I feel her shudder.

I can smell her then, and my mind begins to think those thoughts, thoughts of ecstasy, of uncontrollable need. I hear the beat of my heart in combination with the beat of hers. Blood coursing through our veins. I lower my head down and gently push her head to the side, then I bite. Blood flows into my mouth from her neck and I hear her moan, I continue to suck on her neck, tasting the coppery liquid until I gain control once again.

I pull a handkerchief from my pocket and hold it on her wound. I stare in her eyes.

“Werewolves are bullshit. But I love a good Vampire,” she says.

Mendel's Release is now on Amazon.

This book is the first novel I ever wrote to completion. Now it's done and in the Amazon bookstore and it only took 15 years.  It's hard to categorize this novel, 'Is it a Romance?' or 'Is it a Comedy?' or 'Is it just a nice story?' I think people who like all those genres will enjoy Mendel's Release. 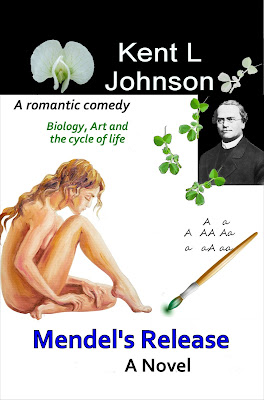 I'm getting close. The final, final edit to Mendel's Release is just about done. I want to get it out and start the creative juices flowing again. I think next post will be a short story about the holidays. But for now, it's promotion time for Bear Justice. 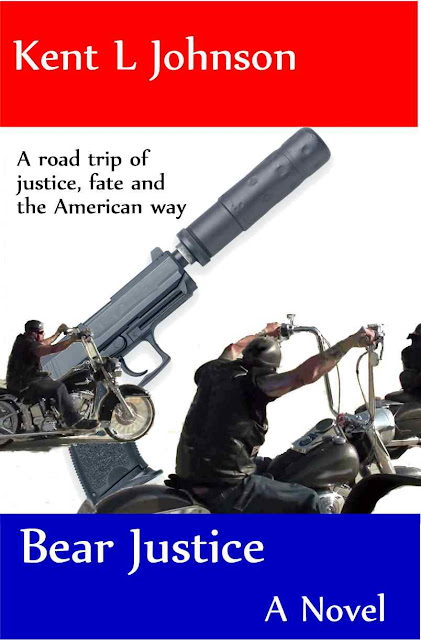 Posted by Kent L Johnson at 1:22 PM No comments:

Got my 2nd proof of Mendel's Release. Hopefully this will be the final/final edit, then off to publication. 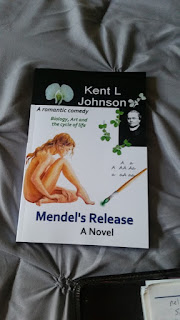 Guess what?  Bear Justice is available at amazon.com in both kindle and paperback forms. Check out my author page on Amazon: http://amazon.com/author/johnsonkent 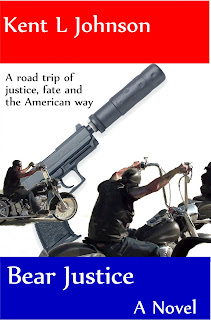 Posted by Kent L Johnson at 7:28 AM No comments:

Guess what? I've been off work for a month or so due to a flood. It gave me time to do some final edits an get two of my books out for publication.  I'll update with Amazon links soon. Until then, Check them out on my author website.

BEAR JUSTICE
MENDEL'S RELEASE
Posted by Kent L Johnson at 11:47 AM No comments: